Projects: a global glimpse behind the scenes at Dutchclamp.

As from mid-2015, Kuala Lumpur's millions of inhabitants and all tourists will be able use the reliable and safe new extension of the Ampang Line. This 17 km long and 13 station extension of the existing metro line is one of the latest projects that Dutchclamp is proud to have been a part of.

A close collaboration between ABB, Dutchclamp and our distributor in Kuala Lumpur resulted in an order of 41,000 Dutchclamp Triple 38-51 cable clamps (cable cleats). 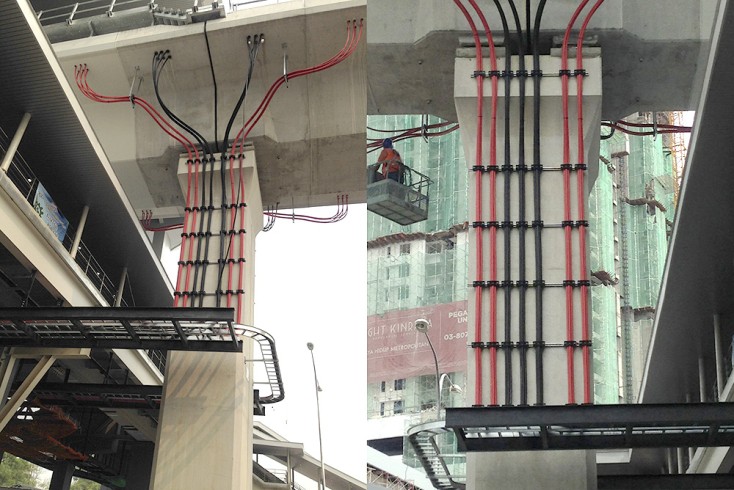 Various types of Dutchclamps were used during the construction of Terminal 2 at Europe's largest airport.

The cable clamps (cable cleats) used to keep the medium and high voltage cables together in the various stadiums during the Sochi Winter Olympics in 2014 together were a variety of Dutchclamp SE and Triple types.

The Large Hadron Collider or LHC, the world's largest particle accelerator, was put into use in August 2008. The accelerator may help discover the Higgs boson. Higgs boson is a particle which gives other particles mass and is the last particle which still needs to be discovered in the standard model of elementary particles. Two beams of protons crashed into each other with a total energy of 7 TeV (7 billion electron volts) for the first time in the LHC on 30 March 2010. The cables for this project have been secured and protected from short circuiting using Dutchclamp cable clamps (cable cleats).

The 420MW Macarthur Wind Turbine project in Australia consists of 140 3MW wind turbines. Dutchclamp provided the cable clamps thanks to our Australian distributor.

The Noord/Zuidlijn (NSL) metro line in Amsterdam, running from north to south, has been under construction since 2003. An average of 180,000 passengers will use this metro line per day starting in 2017.

Imtech is one of two parties responsible for the construction of the Noord/Zuidlijn. The partnership VIA NoordZuidlijn (VIA) - which consists of Imtech and construction business Visser & Smit Bouw - were commissioned to execute the final step for the realization of the Noord/Zuidlijn. An extremely large and prominent project wherein different disciplines, including the completion of all metro stations and the realization of rail systems with all necessary facilities including escalators and lifts, lighting and numerous other installations, come together to ensure that travellers are able to reach their destination comfortably and easily when travelling from Amsterdam-Noord to Amsterdam-Zuid

Imtech decided to use Dutchclamp for the secure and short circuit proof mounting of power cables.